The Ring by Bobbie Pyron 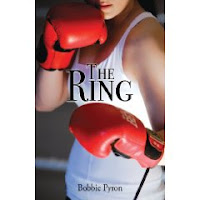 Plagued by slipping grades and a budding criminal record, Mardie’s heading down a path of self-destruction she can’t seem to avoid. Unlike her perfect older brother Michael, who does everything right according to their father, Mardie can’t meet those high expectations. But when she discovers a girls’ boxing club at the gym, Mardie’s drawn in by the fighters’ fearlessness and strength. Having already lost her parents’ trust and shunned by her boyfriend and even her best friend, the ring is the only place left where no one judges her. Angry and hurt by the state of her life, Mardie can’t wait to start throwing punches. But her wise and patient trainer, Kitty, a former boxer who’s coached her share of troubled teen girls in the ring, shows Mardie that boxing isn’t just about fighting—it’s also about strategy and mental discipline—the things that make a fighter into a winner. Mardie begins to apply the lessons she’s learned in the ring to her battles at school and especially at home, where she finds she’s not the only one struggling for acceptance. And, as she trains for her upcoming championship bouts, Mardie hopes to find a way to make her parents proud. Filled with exciting sports action, The Ring is an inspiring story of a girl learning to believe in herself.

The image of a girl in a plain white tank top with a pair of tomato-red boxing gloves trimmed in satiny black–the simple title, The Ring, placed directly in the center of her chest. Simplistic yet somehow provocative; her arms are up, her chin is tucked to her chest, and though you can’t see her eyes, you can perceive her readiness to take on the world.

This was my first impression upon opening Bobbie Pyron’s inspiring and unforgettable coming of age story The Ring, and I’m delighted to report that much like the image that engaged my attention, I couldn’t put this fantastic tale of teen angst, love, forgiveness, acceptance, and learning to believe in yourself while getting comfortable in your own skin, down.

The troubled young woman presented in the beginning of The Ring is not a pretty sight, and at times, you won’t like our misunderstood heroine very much. Mardie isn’t perfect by any stretch. She’s selfish, she’s rude, and she’s hateful to those that love her most. But ultimately, that’s what makes her so real. Because really, what teenager doesn’t strike out at those closest to them in an effort to gain notice?

Are Mardie’s parents really so bad? No. But she truly believes that they are, to the extent that she continually lashes out and makes the entire family miserable. No one is safe from her rage. Not her idealistic father, her understanding step-mother, or her “perfect” brother who just so happens to have a weighty secret of his own. In her quest to eradicate the emptiness that is consuming her, Mardie attempts to drain away the happiness of those around her, even as the guilt of doing so devours her soul. The story isn’t always easy to read, especially when Mardie is at her worst. But there is a beauty in the darkness of the material, and by the end of the first page, I was transfixed.

By peeling off the taint that shrouds Mardie slowly, Ms. Pyron allows us to witness her gut-wrenching decline and consequent rebirth. The bitterness that blankets her is stripped away layer by layer, revealing an insecure girl who is desperate to be loved and praised. It is then that you learn Mardie’s choice of company and thoughtless actions are fueled by her intense desire to belong. In her journey to self-discovery, Mardie introduces the reader to a dazzling and memorable cast of characters. You’ll love Mardie, her parents, her brother, and the exceptional supporting cast that make The Ring so much more than your average uplifting tale. So many individual stories are entwined, and in a six-degree kind of way, come together perfectly at the story’s conclusion. I can’t reveal too much, but as I went into the story blind, I can honestly say I feel that is the best way to experience it.

This is only the beginning of a bright and amazing future in author Bobbie Pryon’s career. The Ring is a definite must read that no one should miss.