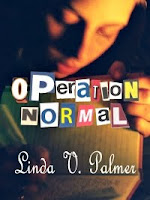 Ally desperately wants "normal" for her half-sister Kayly, something she never had herself thanks to her liberated mom. First on her list of to-dos is contacting Kayly's dad, who promised he'd stay out of Kayly's life just as Ally's own dad once did. When Kat leaves the country on assignment, Ally drops in on the guy to introduce him to his baby daughter. But Kayly's dad doesn't live there--her half brother, Zach, does. And his shocking offer to help Ally find "normal" is nothing compared to what happens next.

Operation Normal, starts off anything but normal, with an abrupt and riveting confrontation. Ally Mills meets the father of her half-sister, and he is far far from what she expected (or hoped) he would be. She’s pursuing some way to make her dysfunctional family function a bit better for her sister though, and the pursuit lands her in the midst of an intrigue, as well as in the middle of love. The intricate family relationships mean that meeting the man of her dreams could be a bit of a concern (until you work out exactly how they are related…)

While we are hoping for true love in one corner, all unexpected, another relationship of Ally’s will present himself… and its more in the way of heart-wrenching than merely surprise. In fact, so many specific incidences (or people) blast in as a ‘surprise’ it’s a challenge to review this without including spoilers. It’s one bombshell after another for poor Ally, and every single one entertains the reader.

The quick pace here is helped by the immediacy of first person point of view, from Ally, a high school senior with adult issues and a vastly mature approach to life, and a truly original approach to problem-solving. ESP and psychic powers play a believable role here, perhaps because Ally simply accepts ESP as another family oddity, right along with a vegan mother who jets off out of the country on occasion.

Ally is intensely believable. The quality of her friendships as well as her trust and appreciation of her friends is one continual standout in this work. Friends and friendship add a just-right dash of heartwarming to this tale that otherwise is largely about personal struggle, obligation, and the duty. Minka, Heath, and even Adele-the-psychic all contribute more than everyday help, but come through for Ally when it really counts.

In Operation Normal, it’s all far from normal, but somehow, it all seems totally plausible. Perhaps it is the wonderful characters, interesting plot, or the straightforward writing style… whatever it is, this book is entertaining. Do read: 5 suns.