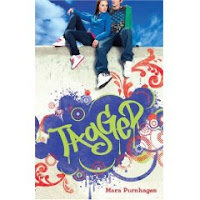 Can Kate Morgan stand up for herself—without being labeled a snitch?

Kate is just as confused as her best friend, Lan, when she arrives at Cleary High to find the building's been "tagged" with a life-size graffiti mural. Could the culprit be one of their friends or classmates? And is the kind-of-amazing creation really vandalism, or a work of art? She's tempted to stay out of it—mostly because, as the police chief's daughter, she's worried about being labeled a snitch. But when the same mysterious graffiti starts appearing throughout the state, putting more pressure on the authorities to catch the vandal, her investigative instincts kick in.

Now Eli, Kate's favorite coworker at the local coffee shop, is MIA. With Lan preoccupied with her own boy troubles, Kate needs to figure out some things on her own. Like why she can't stop thinking about Eli. And what she will do when all the clues about the graffiti point to someone she's close to…

Author Mara Purnhagen tackles the typical teen angst issues in her YA novel Tagged – falling for the wrong guy, trying to figure out where you fit in, dealing with the school’s superficial drama queen – while combining them with a rather unconventional subplot. Kate is our heroine, an average high school junior who spends her time hanging out with her best friend, Lan, serving lattes at the local coffee shop, and trying to figure out along with everyone else in town who’s been spray-painting life-size gorillas on buildings in Cleary, South Carolina. In the middle of the gorilla controversy, Tiffany Werner, the school’s golden girl, is holding the birthday party of the century – and it’s being filmed by MTV, so every teen in town wants an invitation. Tagged follows Kate as she tries to keep her sanity and her integrity while also falling for her co-worker, Eli, who just happens to be not-quite-broken-up-with his girlfriend, Reva.

There’s a lot going on in this story, from a history class discussion about What Is Art to how much teenagers will sacrifice their pride to get a birthday invitation from the school’s rudest and most egotistical student. Kate is a likable character, as are many of the minor characters: the Vietnamese Lan, who always stands up for herself; the aw-shucks Eli, who’s great boyfriend material; Kate’s parents; her coffee shop boss Bonnie; and the collection of students at school round out a realistic cast.

Likewise, the ways the characters act toward each other are believable as well. We’ve all known the obnoxious “princess” who thinks high school revolves around her, as well as the goofy but lovable guys who play the “ham” everywhere they go. Kate’s parents are appropriately embarrassing at times but supportive at others, and she’s a pretty well-adjusted girl herself who manages to do the right thing most of the time, even though it’s not the most popular thing.

So why my hesitation in giving this book a more glowing review? To be honest, I have a couple of concerns about the plot. First, the fact that someone is spray painting gorillas in a Southern town seemed to have potentially racist connotations – yet that’s not something that’s ever explored by the author or any of the characters. Why gorillas? The question is never answered at all in the book. Second, the fact that the mystery of the gorillas drives so much of the plot left me a little confused. I just didn’t care enough about where they might have come from or what their message was supposed to be. Readers are led to believe that there is great significance in the graffiti, but when the true culprit and motive are revealed, it’s more anticlimactic than anything.

So, while I liked the main characters well enough (and I’m a sucker for a sweet love story), it took me a long time to finish this book, because I wasn’t as engaged by the conflicts as I wanted to be. Purnhagen is a solid writer, and I might pick up another book by her, but I’ll be looking for something more substantial next time.

Did you read the same book I read? The gorilla graffiti was exactly appropriate for the "Banana Latte" promotion and the "Monkey Suit" reference on the tuxedo shop. Mara could have picked anything for the graffiti, but I thought the use of the gorillas was a clever choice to weave elements together. The racial overtones are a stretch. Let it go.