Magickeepers, The Pyramid of Souls by Erica Kirov 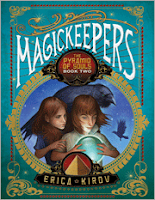 It was stolen from Alexander the Great. To keep it safe, Edgar Allen Poe bargained away his sanity. And somebody suckered P. T. Barnum to get their hands on it. It’s the most closely guarded secret in the magician community. And it’s missing.

What would you do to protect your family from an ancient pyramid capable of stealing your very soul?

Nick Rostov finally has the life he’s always dreamed—and he’ll do anything to protect it.

Nick has only now discovered he is part of an extended Russian family of magicians: the Magickeepers. He lives with his eccentric new relatives at the Winter Palace Hotel and Casino in Las Vegas, where they perform daring feats of magic to a packed house. Real magic.

But Nick and his family face a new danger in the form of a stolen relic, the Pyramid of Souls. The tiny pyramid has traded hands many times throughout history. Its power can steal a magician’s very soul.

Nick knows who took it: Rasputin, leader of the Shadowkeepers. Using his unique ability as a Gazer—one who can see into the past—Nick enlists his cousin Isabella to help him find it. Soon, the two are hot on the evil sorcerer’s trail…until Isabella’s soul is trapped by the very relic they’re trying to find.

Nick will do anything to rescue Isabella and recover the Pyramid of Souls. But will it be enough to save his family?

From the first, the glance back at how it all started – Poe’s raven, to the argumentative deck of cards, nothing in this story met my preconceived expectations: Magickeepers, The Pyramid of Souls is all so vastly better!

Yes, it’s a middle-grade to early teen book and yes, it’ll please the ones that adore the magic and the unexpected most especially. The cover suits it nicely, and suggests this novel’s likely biggest audience, but it is also beautifully written with rich detail, singular characters, an intriguing setting. Let’s not forget the illusions: Illusions that are so much More than they seem.

Thirteen year old Nick Rostov, undercover magician, is the key player here. Nick, kidnap victim after all, adjusts to life at the casino pretty quickly (it’s a nice touch that he can order real Brooklyn pizza and have it arrive still hot. ) He performs illusions – at the permanently snowy Winter Palace and Casino in …yes … Las Vegas. Vegas or not, there is an unmistakable Russian flavor; it might be the pet Siberian Tiger, the odd bits of folklore, the borsht, or the whole Russian clan of cousins that run the show. The slips back in time allow Nick and Isabella to visit famous people (Isaac Newton say; which makes sense since much is explained by considering Newton’s ahem! Fourth law…) They travel through deserts then land at a too-proper Duchess’ home in time for tea. Amid the adventures, interestingly, we start to consider the obligations that magical ability requires.

The advantages to magic leap from the pages. So too, do the deadly, soul-killing dangers. Before the end, Nick must intervene to save cousin Isabella from a fate so dark it could only have been delivered by Poe’s raven. Kirov does a wonderfully clever job weaving together all these different, enchanting adventures. She has a delightfully delicate touch with humor, and at the same time keeps a level of suspense building. Middle-grade or not, this is charming enough for any age to enjoy.

I can’t sit and re-read this one though – I'm rushing out to get book 1: Magickeepers; The Eternal Hourglass by Kirov. I haven’t been so excited about a new series since…since…’quoth the raven, Nevermore.’