Hunter Brown and the Consuming Fire 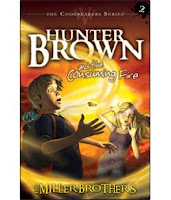 After returning from his first trip to Solandria, Hunter Brown finds himself alone with memories of his adventures and many unanswered questions. He returns to school with the sneaking suspicion he is being watched, but his tendency to think he is being trailed by the Shadow lands him in a heap of trouble.

Soon, Hunter takes a wild ride to Solandria with two new friends, Trista and Rob, and a furry creature, Boojum. The land has greatly changed. The Codebearers have been scattered and the Resistance is weak. With more questions than answers, Hunter, Trista and Rob begin their quest, led by a mysterious flame. Their goal is to find the Seven mentioned in the Author's Writ. But they face a brutal adversary, Xaul, who threatens to steal the flame and destroy all that remains of the Resistance.

Has Aviad abandoned them all to the Shadow? Will Hunter and his friends find the courage to complete their quest… or will they be too late?

It's great fun again as we join Hunter Brown in a wonderful new adventure! Here, back in the "real" world of Earth, Hunter finds himself deserted by his friend, Stretch, who will not believe that the world of Solandria is real, or any of the adventures Hunter says he had. Even though Stretch takes all of Hunter's friends with him when he leaves, Hunter finds new ones in Rob, who is another teenaged Codebearer, and Trista.

Before we know it, Hunter is swept off into another adventure in Solandria. He has a new adversary, Xaul, a Xin warrior with a Vertis sword that has been twisted into the way of evil. Xaul desires The Flame, a mysterious fire that gives mythological powers.

Hunter sets off on a perilous journety to find the flame before Xaul does. Hunter vows to protect the flame with his life, if need be, for if he does not Xaul will take it. And then, it will be used to kill the Codebearers and destroy the Writ.

This was another nail-biting adventure for Hunter, and I didn't want to put this book down, even when I grew sleepy or had other things that needed doing. The Miller brothers are fabulous authors who color their text with imagination and detail. The characters, as before, were three-dimensional and so realistic. The always jolly Stoney was my favorite character. I liked him because he always tried to do the right thing, even when it was difficult or painful. Even more wonderful was the fact that he was so happy and his joy made other people (including me!) feel better.

The book was also populated with terrifying creatures. The Fangworm was particularly fearsome, at least for me. With its four fangs as long as spears, spikes up its back and skin covered with tough scales, he was a difficult monster to defeat. The Scourge -- a kind of mist haze that could take any shape it desired -- was a terrifying, albeit clever, construct as well.

Truthfully this book had me hanging off the edge of my seat with every page I turned. Well-paced with an excellent plot, it's perfect for fantasy and action/adventure readers. I give it four books, and can't wait for the next installment in this series.