Ship of Souls by Zetta Elliott 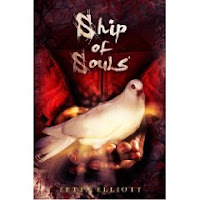 When 11-year-old Dmitri (“D”) loses his mother to breast cancer, he finds himself taken in by an elderly white woman, Mrs. Martin. D loves to watch birds and, while in the park, is amazed to find an injured bird that can talk. He takes it home and soon learns there are malevolent forces inhabiting the region beneath Prospect Park and they are hunting for the bird; Nuru is a life force that has been kept hostage by the earthbound spirits who are ghosts of soldiers that died in the Revolutionary War. Nuru’s mission is to guide the ship that will carry the souls of the dead back to her realm. D has been chosen as Nuru’s host, and must carry the bird from Brooklyn to the African Burial Ground in lower Manhattan where the dead await deliverance.

Dmitri’s entire world is turned on its ear when, at eleven, his mother loses her battle with breast cancer. Because he’s being shuffled between foster care and his new home, starting a new school, and finding new friends, he’s more than just a little off kilter, to say the least. So, he shouldn’t be too surprised when the injured bird he rescues from the park turns out to be anything but a bird, right?

Dmitri, or D as he comes to be called, is an example of entirely too many kids in this day and age. He’s being raised by his mother and has no idea who his father is. When his mother dies, he’s on his own. Left without any family, he becomes a ward of the state, but he’s okay with that. He’s even okay with the idea of being fostered by an elderly white woman, as odd as it seems at the time. His easy manner and ability to adapt to the situation are what guide him along in his quest to help Nuru, the otherworldly being he found in the park, ferry lost souls to their final resting place.

He’s a good kid who’s had a bit of bad luck, but makes it work for him as best as he can. It was nice to see a story about a misfit who not only finds his fit, but also his purpose. D takes his passion for math and bird watching and embraces them, giving himself some kind of focus in his out-of-focus world.

Ship of Souls is a different sort of story sure to catch your attention and hold it tight. An entertaining novel that's good for any age. Its inventive storyline and charming band of misfit characters will intrigue you. It’ll also help reassure you that no matter how lost you’ve become, there will be someone there waiting to help you find your way home. It may be in the form of a friend or an otherworldly being like Nuru, but you will find your guide.

A charming story, well worth the read.