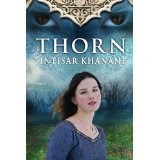 Princess Alyrra’s strength lies in silence. Scorned by her family, she avoids the court, spending her time with servants. When her marriage is unexpectedly arranged with the prince of a powerful neighboring kingdom, Alyrra feels trapped. As the court celebrates her match, dark rumors spread about the unexplained deaths of the women of her new family. Alyrra begins her journey with mounting trepidation. Betrayed while traveling, she seizes an opportunity to start a life away from court.

Walking away from a prince whom she doesn’t know should have been easy. But from the moment she sets eyes on him, Alyrra realizes that her freedom could cost him his life. Without any magical defense of her own, she is plunged into a lethal game of sorcery and deceit. Now Alyrra must decide whom she can trust and what she’s willing to fight for—before her silence proves fatal.

For Alyrra, the idea of an arranged marriage was a dream that couldn't be anything worse than the life that she was already living. In a home where she feared her family and was disrespected at every turn, an unknown husband couldn't be any worse in her eyes. But when the King of Menaiya comes to her kingdom to bid for her hand in marriage in lieu of his son, things just don't add up for her. The king is almost too kind and wants to know her as more than just someone to be bargained and traded for. Can Alyrra trust this mystery man or will he just turn out to be like everyone else in her life? When she escapes the prying eyes of everyone around to talk to the Wind, her troubles seem lighter knowing that her wind will follow her to this distant land. But tragedy strikes and Alyrra is lost in the body of someone else after a witch tricks her and her riding mate as a way to get back at the King. Will this cruel trick be a way out of everything for Alyrra or will she have to fight for everything that she wants to make the witch break the curse?

Kestrin, Prince of Menaiya, has dreamed of Alyrra since he first caught a glimpse of her from far away. Bidding for her hand when it came time for him to marry seemed like the best thing. But the woman that comes to him does not seem like the Alyrra he knew. Will Kestrin be able to figure out the mystery or has he been duped into a marriage of inconvenience? Witch craft could be the only thing that can aid Kestrin in finding the real Alyrra, and it's up to him to decide just how hard he's willing to fight for the girl from his memories. With the help of the King, his guards, and some amazing hostlers, Kestrin may just be able to get the girl of his dreams while defeating a wicked witch all at the same time.

While this story was a completely different genre than what I'm used to reading, and at times seemed a bit cumbersome in the otherwordliness, in the end I really enjoyed it. The growth of Alyrra was something many can relate to, but most specifically the younger generation looking for a character of substance and strength. I recommend this book to older teens due to some adult topics, i.e. murder, hangings, rape etc.  However, this books isn't only something I'd recommend for teens; this book would be good for anyone of any age looking to get into the fantasy world of reading or simply wanting something unique and well written to read.

Thank you for hosting Intisar today.

Thanks so much for this review! I'm so glad you found Thorn an interesting read, especially since it's a little outside of your usual reading. The fantasy elements are certainly there, but it is also about both Kestrin's relationship with Alyrra / Thorn, and Alyrra coming into her own, which I hoped would have a wider appeal. I'm excited that the novel read well for you.

Thorn is available for sale on Amazon; and today only (June 27) the Kindle edition is free! The link is: http://www.amazon.com/Thorn-ebook/dp/B00869SADQ

All the best,
Intisar

It's outside my genre too, but the intriguing reviews have convinced me to read it. Congratulations on the release!

Thank you for your review. I find the topic of arranged marriage fascinating.

Magic and betrayal sound right up my alley!

I think it's an interesting topic that you've chosen and fairy tales are getting more popular with the adults.