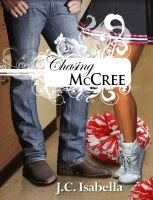 Briar Thompson had it all. The right clothes, the right friends, the right car. Being popular was all that mattered. Her parents were rich and treated like royalty throughout the community. She thought her senior year of high school was going perfectly, until the night her drink was spiked at a party by one of her so called friends.

That was the night she met Chase McCree.

Chase wanted to go back to Montana. To the ranch and the wild, wide blue sky that went on forever. He wanted nothing to do with flashy cars or spoiled rich kids. But he found himself head over boots for the quirky cheerleader who turned her back on her social status. She befriended him when no one else would.

Shunned and hurt by the people who were once her friends, Briar flees with Chase to his family ranch in Montana. There she discovers another world, and apart of herself she never knew.

Chasing McCree is a delightful and thought provoking tale about two young adults from different backgrounds finding a common dream and being willing to fight for it.

I was pleasantly surprised by the effective way Ms. Isabella showcased the difference in her characters. Chase, the hero, was awesome. Even as young as he was, just about to turn 18 years of age, he had the demeanor of a much more well-rounded and sophisticated man. It’s believable and quite refreshing and it’s all due to the fact of his upbringing. The author did a stellar job of highlighting the differences between the shallow, self-centered and callous peers in the high school against someone who shouldered responsibility from a very young age and who was grounded in what was important in life. It certainly wasn’t fast cars, using and manipulating people and snobbish cliques that demean others. False pride and fake body parts also didn’t play into what was important to Chase and the people he came from. His sense of self-worth and confidence showed early on and it was integral to the story.

The person who experiences the most growth, is Briar. It was funny how she met Chase in the beginning, but it was also rather scary. The ramifications of what could have happened to her are all too real. The author’s description of how Chase saw her was very telling and how she reacted to him once she became aware of her situation was equally so. I felt bad for her because of Ms. Isabella’s descriptions of the heroine’s family life. The dialogue and the details portrayed a very dysfunctional family. It took her meeting Chase to open her eyes to what was wrong with her life, her friends and her decisions up to that point. It takes courage to make changes. It takes a lot more to take a stand and not back down even when people that she used to trust prove they were never worthy of that trust. Watching Briar take each step towards a maturity that left her peers in the dust was wonderful reading. I enjoyed seeing a young woman emerge from the naïve girl she’d been. I also liked her sense of adventure, her willingness to try new things and her general joy in life which blossomed from Chases’s acceptance of everything about her, including her tears. It was beautiful, romantic and heartwarming.

The most fun secondary character was Briar’s grandmother. She was amusing, full of kick and vinegar, and the one person who truly understood Briar. She was integral to helping me believe in the heroine’s ability to embrace the changes that she faced. No one can stay a snob with such a wonderful bundle of energy and sass in their lives. The author had a moment of genius when she created Grandma.

The conflict comes from parental expectations and shallow and vicious peers. I loved the part when Chase told Briar that she should have used a different book. That startled a laugh out of me. Another conflict comes from merging a city girl with a country boy and finding their dreams aren’t that different. It’s what they had to do in order to make them come true that kept me flipping the pages.

For the purpose of the story, I’m sure the level of dysfunction that occurred in Briar’s family was necessary but it seemed rather extreme to me. I can’t imagine a mother and a father having that intensity of self-absorption; one perhaps, but not both. At least, I certainly hope not. In the heroine’s case, however, it cemented my feelings of concern and horror on her behalf which, I expect, was the author’s intention.

I enjoyed Chase’s family and the descriptions of ranch life. There is another external conflict that bordered on nasty and provided the right amount of suspense to stir the plot as well as giving another push towards character growth for both Chase and Briar. It was well done and kept me enthralled.

The wrap-up of the happily ever after reminded me of one of my favorite made for T.V. movies, Night of the Twisters. In that movie, the epilogue came from the voice of the main hero and gave highlights of what later happened to the characters that we saw in the movie and how things played out in their futures. I remember the winds of the zephyr and crying. I had tears in my eyes from Chasing McCree as well. The follow-up was so thorough and beautiful, I sighed when I got to the last page. It’s sweet, tender, respectful and full of hope with a wonderful future spread out before Briar and Chase. This was an awesome read and I recommend it highly.