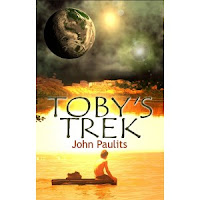 Toby Manders is a bored sixteen-year-old Earth immigrant to Hobson’s Planet who is tired of living the quiet life of a farmer. After running away from his father and home, he becomes close friends with Jar Kensch, a native Walber boy. He and Jar, who has family troubles of his own, get themselves entangled in the feud going on between the Earth immigrants and the Catonians, conquerors of Hobson’s Planet.

Can Toby resolve the trouble he and Jar get into, resolve his estrangement from his father and avoid the boring life he left behind?

Toby and his father left earth behind and moved to Hobson’s planet to farm and have a better life. Neither of them planned on working for Catonians and having to give them all the food they harvested.

Mr. Paulits writes a good sci-fi tale about a world with three nationalities who live separately and don’t care much for each other. There's the conflict between the Catonians and farmers, and the Walbers want nothing to with either party; they just want a simple life on the river with a bit of farming. The author uses the conflict between the various groups to set the stage for Toby’s story. He’s sixteen, bored with farming, and wants to find his own way and live his own life instead of staying on the farm and being bossed by his father.

When Toby gets brave enough to run away, he finds himself running right into other problems. Soon the soldiers are looking for him, the young man he meets is a Walber and gets him into more trouble. Mr. Paulits’ story is about Toby coming of age. The trials and tribulations he lives through by trying to make things right teaches him a lot about life. There's a child’s death in this story, so judge the maturity of the child you buy it for.

My grandparents lived in Czechoslovakia, and the same thing happened to them. When their crops were harvested, the Communists came and took it all away; in this story, it’s the Catonians taking the crops. This future world didn’t learn anything from the past.

The author shows Toby’s indecision on which way to turn and lets you see him figure out which way is the most important. He also learns that sometimes you have to sacrifice what you thought you wanted and embrace the change that is possible.

I found this world believable and Toby’s story to be authentic. He’s going through adolescence and we all learn hard lessons then. Why not share this story with your young one who has an interest in science fiction? It’s good read and will take you on a walk through another world.

Thanks for the helpful review for Toby's Trek. I've read it on my Sony, and will also order it as a gift for my niece and her young son. She's always on the search for good YA stuff she can get for him, yet enjoy herself, too.

The life lessons Mr. Paulits gives through his characters' adventures and difficulties are done in such a manner that his story does not come across as "preachy" the way so many others do.