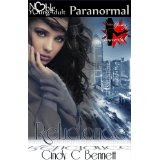 Twenty-year-old Dahlia hates the life that she is forced to lead. But the time is quickly coming when she must make a decision that will shape the rest of her life. She's set her sights on Jace. He is someone her family will approve of, someone that will finally gain her acceptance among her people. Then Cam comes into her life, making her question what she assumed was her inevitable destiny, giving her hope that she might be able to lead the normal existence that she longs for. But fate has its own plan for Dahlia. Now she has to find courage she didn’t know she possessed to fight for her own future.

There is much more to Dahlia than meets the eye.

Dahlia is more than a little awkward. She’s clumsy, unpopular, and hopelessly out of touch with the current trends. She doesn’t really fit in anywhere, but even worse is the fact that she feels like an outsider in her own family. Her life seems very lonely, but I admire the fact that, for the most part, she does her own thing and lives by her own set of principles.

Dahlia and her family definitely aren’t human, but I won’t spoil the story by revealing what sort of paranormal creatures they are. Ms. Bennett has an interesting take on this particular branch of the supernatural tree, but when I finished reading, I was left wanting to know more about the history of these creatures as Ms. Bennett envisions them. Ms. Bennett included just enough detail to keep the plot and characters clear, but I felt that the history of these beings could have been fleshed out a bit more.

Dahlia is in a difficult situation. On one hand, she longs to be accepted by her family and her kind. On the other hand, she actually hates her kind and their way of life. When Dahlia decides to pursue Jace, it is clear that she cannot stand him. She only wants to be with Jace to fit with her family and, in turn, the supernatural community she belongs to. However, as I said, she dislikes her kind, so I found it hard to believe she’d be willing to bind herself for life to someone she can barely tolerate in order to fit in with a group of beings she abhors. This doesn’t seem like much of a life.

The one bright spot in Dahlia’s life is Cam, a coworker at the hospital where she works. Dahlia’s feelings for Cam catch her completely off guard, but their romance is definitely sweet. I love the way Dahlia comes out of her shell when she’s with Cam. Something just clicks when they are together. They are both very comfortable around each other and I enjoyed all the flirty banter between them. It was truly a pleasure watching their romance bloom. However, Dahlia’s determination to fit in with her kind just might cost her the love of a lifetime.

The secondary characters aren’t as developed as I would have liked, but they serve their purpose in moving the plot along. I thought Dahlia’s father acted a bit oddly toward the end of the story. When Dahlia talks about her family, she paints a picture of a family that doesn’t seem to care about her or each other. However, her father seems to show a different side toward the end. Why did he wait to show this side of himself if he truly cared about his daughter? I couldn’t help but wonder if it was going to be a case of too little, too late.

Reluctance is a fun, fast paced romance that can be read in one sitting. Dahlia is a sweet, quirky heroine and her romance with Cam is compelling. I must say again how much I enjoyed watching them fall in love. If you want to know Dahlias secret and how Cam will handle it, there’s only one way to find out. Pick up a copy of Reluctance today.

Wow, thanks for the great review! I appreciate it. :o)