Tools of Prophecy by Michael A. Rothman 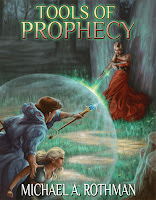 
The TOOLS OF PROPHECY is the second volume in an epic saga which describes a prophecy that has placed the Riverton brothers in the lead roles of a struggle to save their world from being overrun by unspeakable horrors. This destiny requires that they face off with the demons that nearly destroyed their world over five centuries ago.

In the first book, the population of wizards had been practically eradicated by the former tyrant. The Rivertons are now charged with creating an Academy of Magic, recruiting qualified students, and furthering their own training with secrets that have long been held by the reclusive elves.

Despite their youth, a mysterious spirit has engaged them in an epic struggle to gain mastery of their newfound skills, help raise and train two armies, and stay alive long enough for their final showdown with destiny.

The only things that stand in their way are the assassins hired to destroy them and the Demon Lord’s minion who holds a personal grudge and intends to witness the young boys’ deaths.


I so enjoyed the first book in this series that I couldn't wait to get my hands on the next.  Tools of Prophecy is a solid fantasy novel for kids.  It's definitely the second book in a series, and I'm not certain how well it would stand alone, but that's okay: Heirs of Prophecy is a great book, so read it first!

This book continues the battle between good and evil, introducing an even greater good, the antithesis to Sammael.  It also brings in other evil entities, and begins to unite the various factions in the land who are fighting for good.

It's this coming together that slowed this book down a bit.  The first half is mostly the various folks finding their place. The establishment of the new school, training, and so on.  While certainly necessary, as much of this learning is integral to the plot later on, it did make the story drag a bit.

Still, things certainly pick up again in the second half, as threats become real, battles rage, evil attacks good and main characters may (or may not) survive.  The author has a firm grasp on his characters, and they don't act without motivation.  Some feel a little smug to me (Sloane, for instance ... there were times I wanted to sit her in a corner), but I need to remember that these are kids we're dealing with, ones who don't have the benefit of time and experience to temper their behavior. They're endowed with these amazing gifts and powers, it's only natural they'd get a bit smug or arrogant at times.  One thing I do enjoy with these books is that the parents are present, and they act like parents should.

The book has everything a reader wants: action, romance, excitement.  And the ending!  Exciting, interesting and "can't-catch-your-breath" exhausting. Then, just when you think it's all clear, the author tosses in a cliffhanger again and leaves me wanting more.  I am looking forward to the next book in the series and I highly recommend it to kids of all ages.

Posted by Long and Short Reviews at 7:57 AM

Thank you for hosting Michael today

I love this series! I can't wait for the third book! :)

Great to know the whole series is worthy!

It sounds quite enjoyable!

I started this series this month, and I am already wanting more. Amazing job Michael A. Rothman.

Ohhhh! I am reeeeally looking forwad to reading Tools of Prophecy! Nice review!

I do want to read the series in order & I love the fact that these children have parents.