Ameca J and the Legacy of Menindus by Paul Xavier Jones 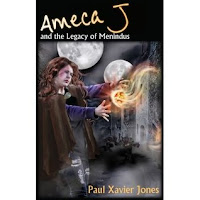 The Legacy of Menindus... Teenage life seems vastly unfair to fourteen year old Ameca or Ameca J, as she prefers to be called always being pressured by her Dad to watch out for her stupid and annoying ten year old sister, Fraya. But when the girls are mysteriously transported by The Spirit to a dangerously different world populated by mediaeval Men, noble Elves, magnificent Dragons, and savage creatures, Ameca s whole perspective has to change and change quickly if they are to escape the clutches of an evil entity known as the Scelestus, who wants them for the magical powers they did not even know they possessed.

Their stressed out and overworked father, Paul is summoned by The Spirit to join his daughters in the mythical land of Mythrania, where he learns that they are the One, the Flame and the Flower . They are the heirs to the legendary High Magi, Menindus, who foretold of their coming to save this world and their own...But this is no fairytale; the dark entity known as the Scelestus has a plan to harness the power of the universe and to completely dominate all life...... Can Ameca and her family stop the Scelestus, and prevent a catastrophe that would see the enslavement of countless worlds, as well as the destruction of their own...?

Look out evil...here come the girls.

This is unlike any fantasy story I have ever read. From start to finish this story drew me in. With a vast array of both recognizable and new mythical creatures, I was truly entertained.

Ameca J is everything you expect in a fourteen year-old girl. She has a strong will and sassy tongue that can rival anyone. I also enjoyed her view of her "annoying" little sister, Fraya. Though she has all the makings to be a great woman, I was still able to see her innocence and inexperience. I could not wait to see what she did next throughout the story. Especially since she was dealing with forces that could break even the strongest of adults.

Though I can see how Ameca was the main character of the story, the author provided me some insight on other characters such as her sister, father, and others helping them on their quest. Each character had their own traits that seemed to shine through and make them intriguing. Whether it be Ameca's father's impatience, or her sister's ability to manipulate people, I looked forward to their actions and what kind of effect they'd have on the plot.

The fantasy element on this story is what really made it stand out from the rest for me. The author did a wonderful job with incorporating fantasy with various myths such as werewolves, wizards, and folklore. I quickly found myself picturing Menindus and felt as if I was there with the characters experiencing all this fascinating world had to offer. I can easily see why kids and parents would enjoy reading this story.