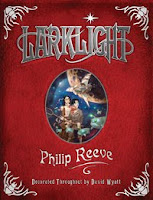 Arthur (Art) Mumby and his irritating sister Myrtle live with their father in the huge and rambling house, Larklight, travelling through space on a remote orbit far beyond the Moon. One ordinary sort of morning they receive a correspondence informing them that a gentleman is on his way to visit, a Mr Webster. Visitors to Larklight are rare if not unique, and a frenzy of preparation ensues. But it is entirely the wrong sort of preparation, as they discover when their guest arrives, and a Dreadful and Terrifying (and Marvellous) adventure begins. It takes them to the furthest reaches of Known Space, where they must battle the evil First Ones in a desperate attempt to save each other – and the Universe.

Recounted through the eyes of Art himself, Larklight is sumptuously designed and illustrated throughout.

The back cover of this book states Larklight is "A Rousing Tale of Dauntless Pluck in the Farthest Reaches of Space". This statement is intriguing and made me want to find out more.

First I had to put aside everything I'd heard about traveling or living in space, it didn’t apply here. Then I had to set my imagination free to fully enjoy the story.

This tale of space, adventure and mystery is set in Victorian times. The story is told by twelve year old Arthur (Art) Mumby and (from Art's point of view) his irritating older sister Myrtle—or to be more accurate her diary. They live with their father in a house which is in orbit around the moon. Autoservants look after their needs and a gravity generator keeps all in place. The only thing they lack is their mother who died several years before in a spaceship accident.

Different species inhabit the planets and travel through the ether by wooden spaceships. Alchemists perform the "chemical wedding" of the alembum to enable the ship to move through space.

Art is a superb storyteller and relates how spiders cocoon Larklight in a gigantic web and destroy his father. He and his sister escape by lifeboat and land on the moon where they meet the fifteen-year-old pirate Jack Havock and his crew of aliens. The siblings are separated, reunited and separated again as Art and his friends attempt to alert the British Government to the danger coming towards Earth. Their journey takes them around the solar system until they eventually arrive in London in time for the opening of the Crystal Palace.

I thoroughly enjoyed reading this book. It has everything one could wish for. Humor, fainting ladies, horrible nasty creatures, dashing young heroes, and fantasy in a very unusual form. There are battles both in space and on planet surfaces and Art and his friends make discoveries which are totally unexpected. They rocket through space chased by the baddies and the goodies—aka the British Empire Space Navy—and become embroiled with an ancient race that seeks to take over the solar system.

Larklight is unique in its setting and the author and artist have collaborated on a further two books in the series taking the tale of Art and his family to further heights. This book is suitable for Middle Grade and Young Adults and I am positive Adults would enjoy reading it too. I have no hesitation in giving Larklight 5 suns as it is a book I would be happy to see my children to read.