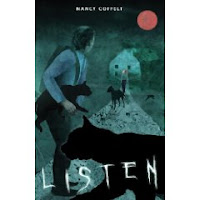 The lives of three people intersect unexpectedly in this unique, compelling story. There’s Will, an eighteen-year-old living alone since his mother died and his drug- and alcohol-addled brother was put in jail. Then there’s Kurt, a troubled, fourteen-year-old loner still reeling in the aftermath of his mother’s abusive boyfriend’s death, and his part in it. And there’s Carrie, a middle-aged schizophrenic who “hears” the thoughts of the abused and neglected neighborhood animals she rescues and brings home. When Carrie and Kurt connect, she agrees to pay him for each “stray” cat or dog he delivers. But when her “rescuing” goes one step too far, events spiral dangerously out of control. Told from alternating viewpoints, Listen is the haunting story of three people dramatically thrown together by fate, each struggling to come to terms with their harrowing past.

I can honestly say that I have never agonized over a book review like this. More than once, I’ve sat in front of the PC in an attempt to convey what I experienced while reading Nancy’s Coffelt’s dark and poignant story, Listen. A book that explores the most closeted facets of life – mental illness, child abuse, isolation – and shares them via the voices of characters who stay with you for days after you’ve left them behind...whether you want them to or not.

Listen begins via the voice of Will, an eighteen-year old who has lost his mother and brother due to tragic circumstances. As he sits in front of his computer, writing in his journal, you sense his need to connect with something – even if it’s the blackness of the screen with the flashing cursor in front of him. Oddly enough, it is this isolated soul that will be considered the most “normal” of the characters. Kurt, the second voice we meet, is a boy on a one-way path to destruction, while Carrie, the schizophrenic animal collector, is slowly descending into a second bout of madness.

The connection between them is serendipitous, as are the similarities. All of them are alone, harbor dark secrets, and long for something they’ll never have. In Will’s case, he wants emotional interaction. Young Andy wants to be loved by his absentee father, and Carrie wants to be forgiven for a horrific tragedy in her past. As the story progresses, you’ll delve deeper, peeling back layer after layer. Beneath the surface, you may or may not find what you expect. That’s the beauty of the work, and what makes Listen unforgettable.

Personally, I believe the reason Listen is difficult to review is that the material touches on the most disturbing recesses of the human condition. After all, monsters surround us each day. You don’t need a closet or a tight space under the bed for them to hide. Fathers, mothers, brothers, and neighbors are just as dangerous, if not more so, that figments of the imagination. In Will and Kurt’s situation, they’ve each had loved ones violate their trust. So it’s difficult to watch as Kurt begins a reluctant friendship with Carrie and you’re well aware of her descent into the grips of schizophrenia after refusing to take her medications. While repressing her illness, she’d never harm Kurt. But as the edges fray and she loses her grip on reality, she becomes someone else entirely. It’s like an oncoming train wreck you see but cannot prevent.

You’ll want to warn the characters, to tell them to get off the track, but are helpless to do so. Instead, you watch the events unfold, unable to turn away upon impact. I had a good idea of what was bound to happen early on, but even knowing what was to come didn’t adequately prepare me for the reality of it. When the dust settles, and you are left with the wreckage, the reader realizes that despite all of the headway the characters have made in their lives, they are still inevitably alone. That’s the singular human tragedy of life. No matter whom you surround yourself with; ultimately, there is only you.

I have nothing but praise for the style of writing and pace of Listen. Although it’s the first story I’ve read without chapters, I felt the page breaks worked and created a nice flow from the viewpoints of the characters. I couldn’t put the story down from start to finish, and even carried this book with me into the movie theatre as we waited for the lights to dim before the feature (I also read as we drove to and from the location, if that’s any indication of my interest). The characters are engaging and the plot is beautifully woven, snaring your attention and refusing to let go.

The recommended age for this story is 14+, but I’d consider upping that by a couple of years, or better yet, giving Listen a read and judging for yourself. Though the material is dark, Ms. Coffelt has a beautiful voice and twines a tale you won’t be able to shake for days. It’s powerful in that it’s thought provoking. I spent hours discussing this book with friends who haven’t read it, and even then I couldn’t find the proper words to adequately express just how I felt. Oftentimes, a dark impression lasts much longer than a prismatic one. When you find something like that, you don’t dismiss it or put it away.