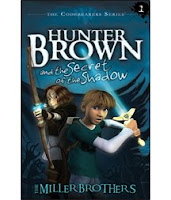 Strange visions... hideous monsters...startling revelations... Hunter Brown never expected a summer like this, and it's only getting started! After one of his infamous pranks backfires, Hunter unexpectedly finds himself in possession of an ancient book and key. Little does he know the mysterious book is a gateway to Solandria, a supernatural realm held captive by the Shadow. In Solandria, Hunter joins forces with the Codebearers, a band of highly trained warriors who form the Resistance to the Shadow. But before he can complete his training in the ways of the Code, Hunter is sent on a mission far more dangerous than he ever bargained for. Now with his life in peril and the future of Solandria hanging in the balance, Hunter is headed for a showdown with the Shadow and a battle to save his soul from a fate worse than death! Is Hunter’s knowledge of the Code deep enough to uncover the secret of the Shadow, or will the truth be more than he can bear? Hunter Brown and the Secret of the Shadow is the first installment in The Codebearers Series. The story incorporates an added layer of symbolism inspired by John Bunyan's Pilgrim's Progress to communicate spiritual truths and themes to readers.

From the mysterious beginning of the book when Hunter Brown is rescued by the janitor from his school (who turns out to be Evan, a Codebearer), to the moment when Hunter is chased into a graveyard by dispirits trying to steal the Author’s Writ , this book had me hooked.

Falling into a grave and then through it into the Lake of the Lost, Hunter finds himself engaged in a battle with the Shadow who is trying conquer this new world called Solandria. Hunter joins forces with the Codebearers who follow the precepts contained in the Author’s Writ and form the backbone of the resistance.

Hope, a native of Solandria and part of the resistance, becomes Hunter’s close friend. She was my favorite character in this book because of her strength and courage. She never panicked, always stood by her friends and really showed what kind of person we should all strive to be. I really admired her from the moment she entered the story.

Hunter wasn’t always such a stellar character, and had his flaws. But he was determined to do the best he could, and even when he got frustrated he pushed through. I remember how he handled trying to walk into the revealing room – a place where only the humble may enter. Once he accepted that he didn’t know everything and that he had a lot to learn, he was able to get in.

I admit to being a bit frightened by the monsters in this story, especially Kane, a gorwing. With his huge size and strength, sharp teeth, long, curled horns and ability to fly he was by far the most threatening creature in the book aside from the Shadow. The Scrill was also quite terrifying. So powerful, when it attacked one group in the resistance, it massacred the entire company save the captain.

Scene after scene, exciting adventure after adventure, this book kept me glued to the pages. The writing was descriptive, clear and interesting and the story was well-plotted and truly fascinating. With inspirational undertones, this story delivers a message along with the excitement. It taught me that we need to be humble, to not to allow our less positive emotions (like fear, frustration and anger) get the best of us and live our lives not just for us, but for others as well.

I can’t recommend this book enough, and am definitely planning to start reading the next one in the series the moment I’m done writing this review. Kudos to the authors for this marvelous read!